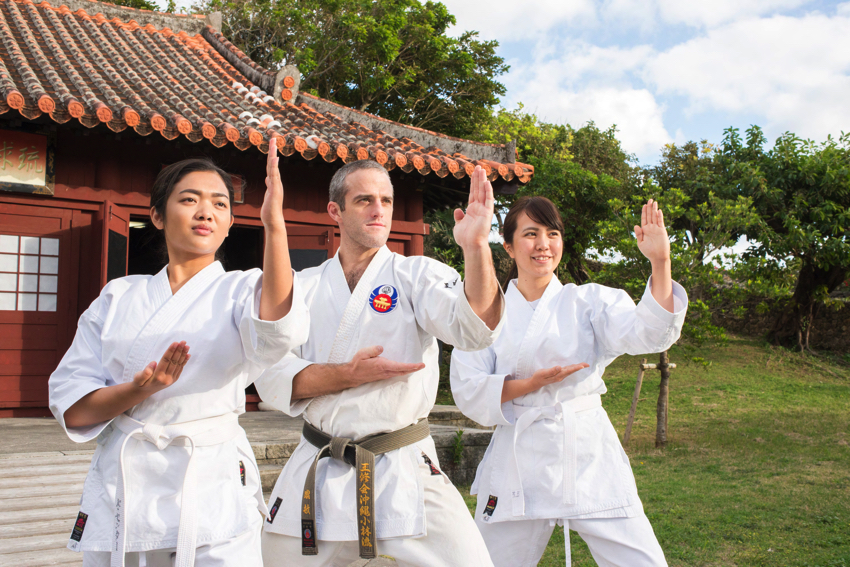 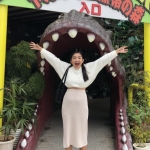 It has been 4 months since I came to Okinawa. Here I am at the Karate field located in Murasaki Mura Theme Park.
I met three Karate teachers, Sensei Kanjo, Sensei Kevin, and Sensei Florian, here. 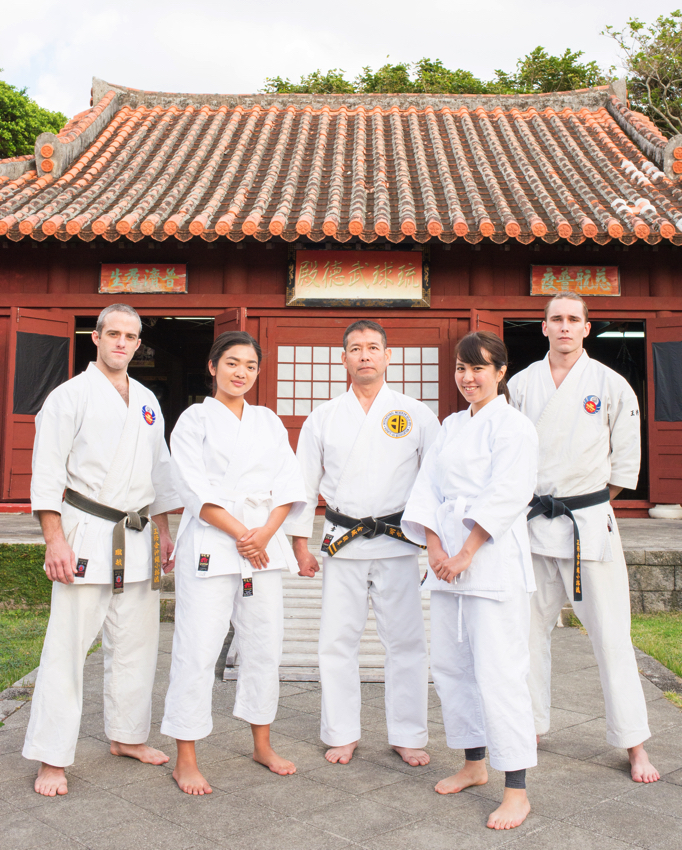 →Starting from the left, they are Sensei Kevin, Maria (me), Sensei Kinjou, Our Fellow Staff, and Sensei Florian.
（Please pay attention to the color of Sensei Kevin’s belt!）

All of them are BLACK BELT HOLDERS as you can see in the photo!☆

It was a great honor to meet these renowned Karate instructors!

Sensei Kevin has learned Karate since he was 12. Not only Karate, other martial arts are also within his area of expertise. Eventually, he got the black belt at the young age of 24.

（（I wondered how long does it take to become a black belt holder?））They told me that quick learners may be able to earn it within 3 or 4 years. But most people need a lot more time and efforts to train themselves.

Is grey belt the next level after earning a black belt?!

Sensei Kevin’s belt had caught my attention when I first saw him.

I cannot help but ask Sensei Kevin this question. He said that the black belt will eventually fade to grey color as the practice goes on. The color of the belt does reflect the years of experience~this is so cool!

Achieving the black belt level is not the final stage of Karate. It is his persistent learning that brings him power. 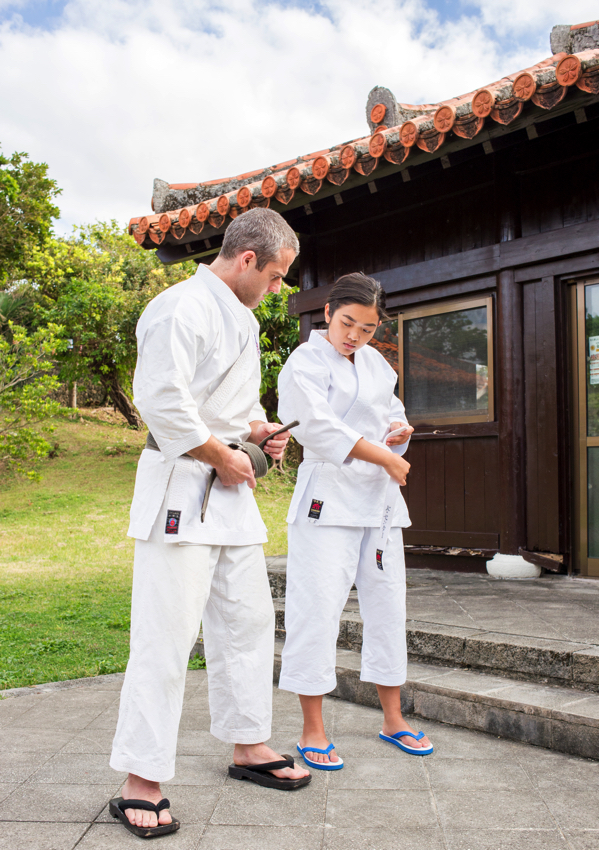 →I was so amused by the story behind the “grey belt”. However, as I am still the newbie of Karate, owning a grey belt will still be a long term goal for me.

Sneakers or sports shoes is not needed as you will learn with bare feet.

Oops, I forget to introduce myself before I start.

I am an university student from UK.♪

I have moved to Okinawa, Japan for an one-year internship starting from Sept 2017.

When I thought of activities to do in Okinawa, “Karate” and “Snorkeling” eventually came up to my mind. Growing up I was never told to learn to defend myself, and that brought a lot of fear in my life especially nowadays during turburlent times…and therefore Karate became the first thing on the list that I want to try.

I took several Karate courses which is mainly focus on self-defense for women in UK. However, the courses were all one-time lessons, so it’s always easy to forget in the next week. If you asked me “What technique should I use if I’m really in a dangerous situation?” I had no idea actually, so I quit learning self-defense skills. I thought what I got from those lessons was just feeling safe by knowing the knowledge.

When I was little, I was told never walk alone even in the daytime. Moreover, wherever I go, always have someone accompanied. The lack of self-defence knowledge made me feel insecure all the time.

After moving overseas, I am now more than determined to finally invest time to learn and love the capabilities of my body.

After talking to Sensei Kinjou and Sensei Kevin, I was surprised knowing that there are four different styles of Okinawan Karate. I discovered the art in depth, a lot of aspects deeper than self-defence resonated with me.

It may sound a bit exaggerated to say in this way…but learning Karate had led me connecting the philosophies of movements with life itself, learning the value of a human life, growing as a unit and not on your own. Not only knowing your body but really feeling every breathe and every movement, not just in one area but throughout your entire structure.

I didn’t know my own body and the power it had. 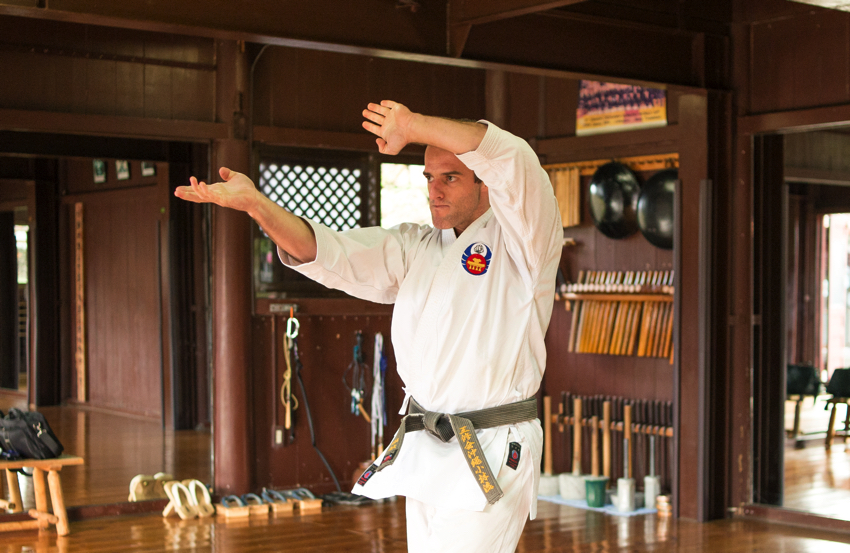 →Sensei Kevin, the instructor of Shorin-ryu 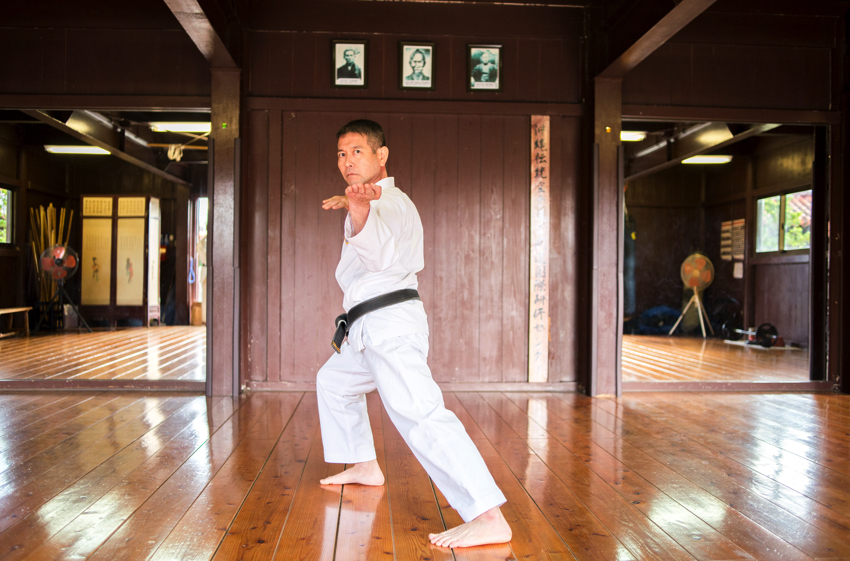 →Sensei Kinjou, the instructor of Goju-ryu

(A new comer like me may understand my feeling) One of the big differences between their styles is “the direction of movement”. Most of the movements of Shorin-ryu are made in horizontal direction;movements of Goju-ryu are in vertical direction.

Even though Sensei Kinjou and Sensei Kevin have different Karate styles, the great respect they showed  to each other impressed me. 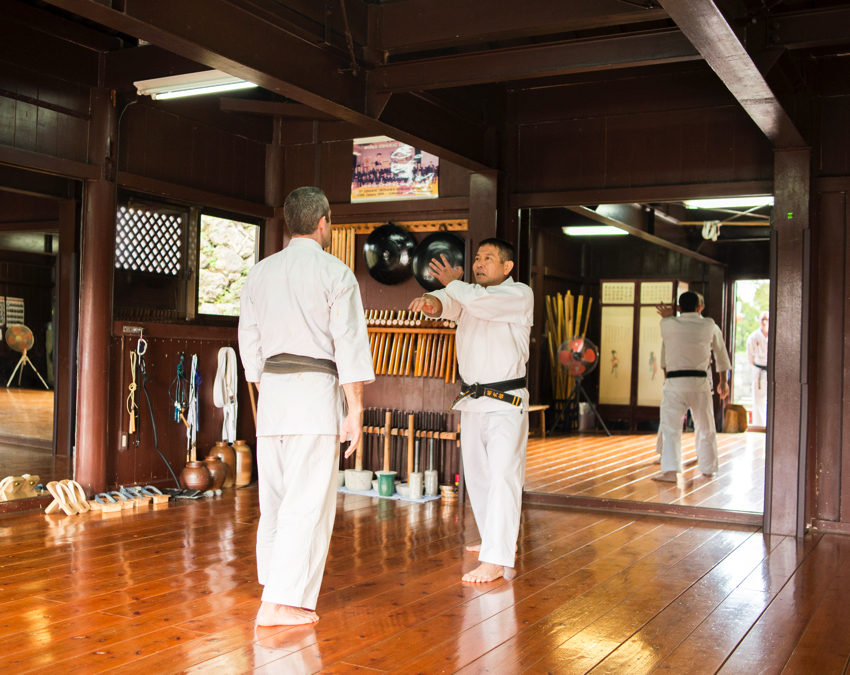 →The two masters are exchanging and learning the techniques from each other.

Introduction of the Dojo

Here is the Dojo of Murasakimura! 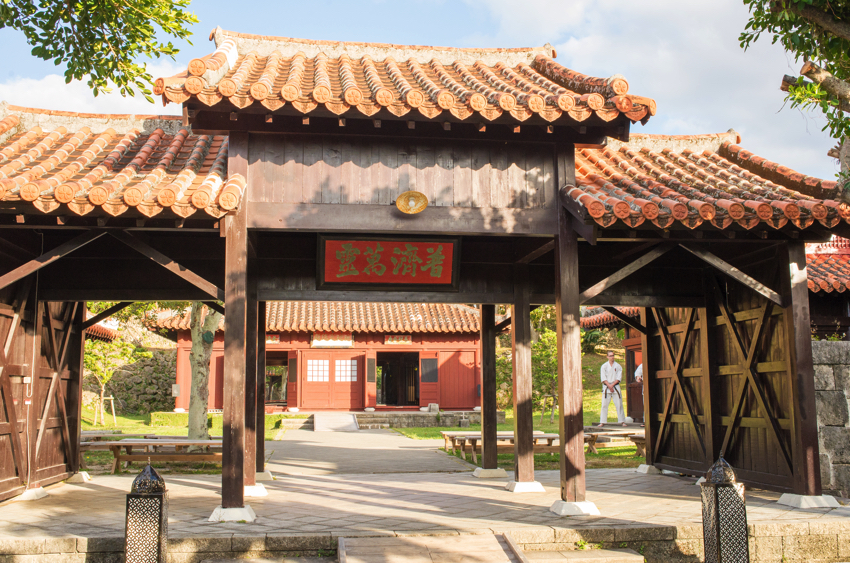 →The setting of the gate. 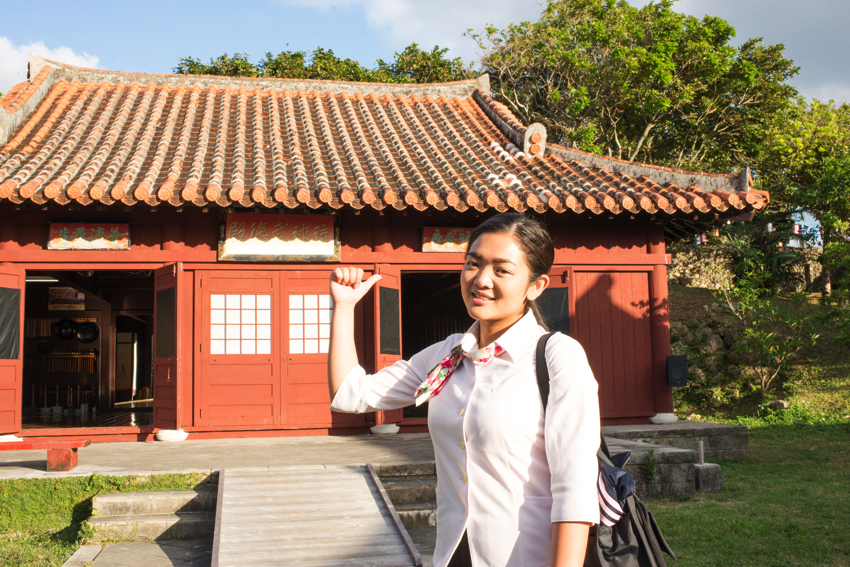 →You can reach the Dojo after passing through the gate.

Doesn’t it look like a movie setting? I feel very excited just by looking at it.

Just beside Murasakimura is Hotel Murasaki Mura. It seems that most of the guests who take the karate lesson stay here for convenience. 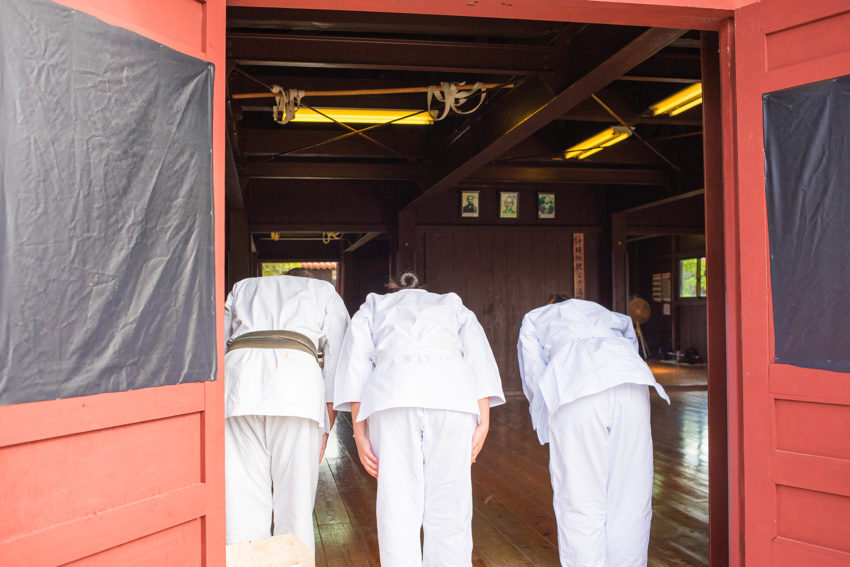 →I left my ego at the door along with my shoes.

Bow before entering, and then the meditation session will begin. 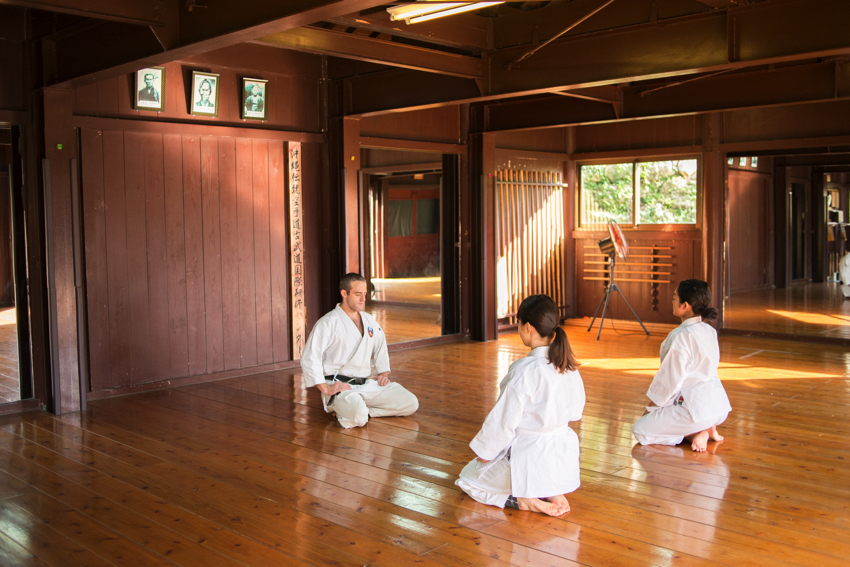 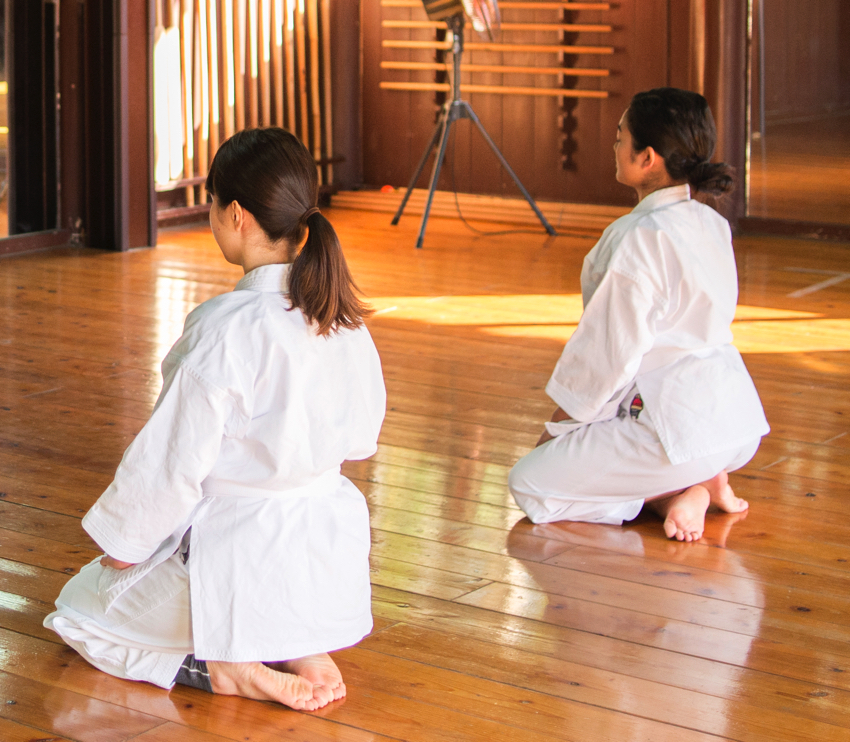 →My Seiza(sitting with bending legs) seems a little bit different from the correct one?
(The left handside is the correct Seiza shown by our fellow staff who accompanied me)

I am trying to think of words to tell you the atmosphere I felt here, and its proving to be more difficult than I had expected. I somehow knew this was something I always wanted but put off because of other distractions, and mainly because of my ego. The tranquility and peace that I felt could hardly be found in any hectic places.

Warm-up exercise that differs from the regular ones.

Then it’s time for the warm-up session.

I was given a small warming up but I was told that the structure of a karate session is not like other sports. The length and contents of the warm-up movement can be totally different depending on the technique I would like to practice on that day. The warm-up session can last up to 30 minutes. 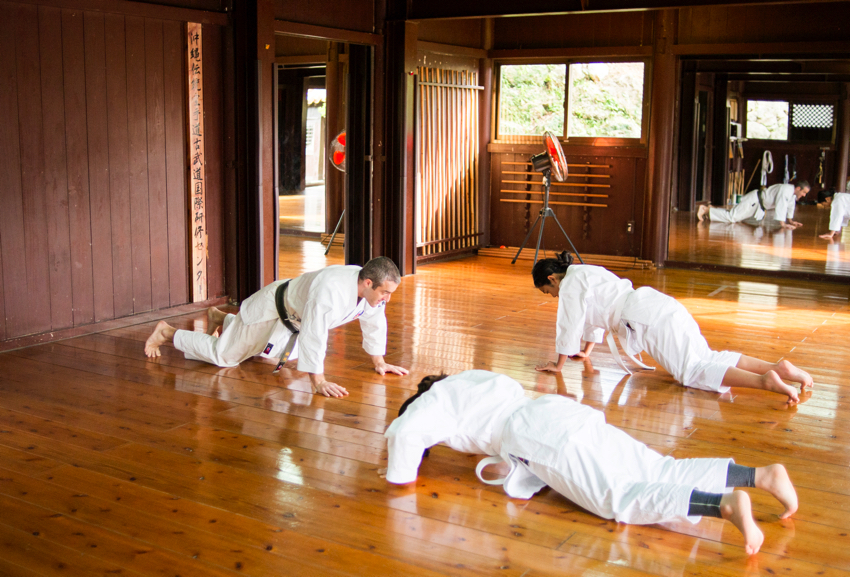 →A serious preparation session is DONE! But…

Sensei Kevin and other karate sensei in Murasaki Mura are more than willing to welcome new comers (both experienced and inexperienced), but please don’t fool around (LOL).

Please bear in mind that there is a high possibility that your body will crumble and fall apart like Mr. Potato Head of the Toy Story the next morning.

(The next morning, I thought I would die due to the tough training I’ve had.)

After the warm-up exercise, we headed to the weapon area where had caught my attention upon entering the dojo.

To my surprise at an era Okinawa was ruled by one emperor and that Emperor said no weapons, therefore most of the weapons originally used were tools from farms.

As you can see in the picture, I got to learn a little about Tonfa, a wooden weapon. The smallest detail such as the angle and the way you grip it can affect how effective the weapon can be, “Grip as hard as I can and place it in alignment with my arm” said Sensei Kevin. 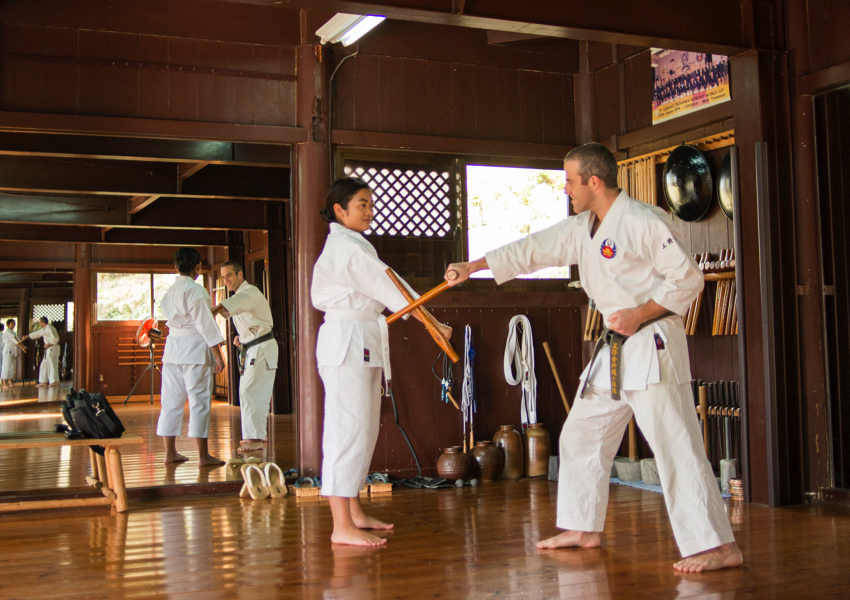 After teaching us the technique of using Tonfa, Sensei Keven suddenly use Tonfa to attack my wrist. I actually got panic at that time, so the smile you see on my face was the mask behind the fear of losing my arm (I know I’m being dramatic but I thought it was bye bye to my right arm) gripping it with every force I had in my hand. 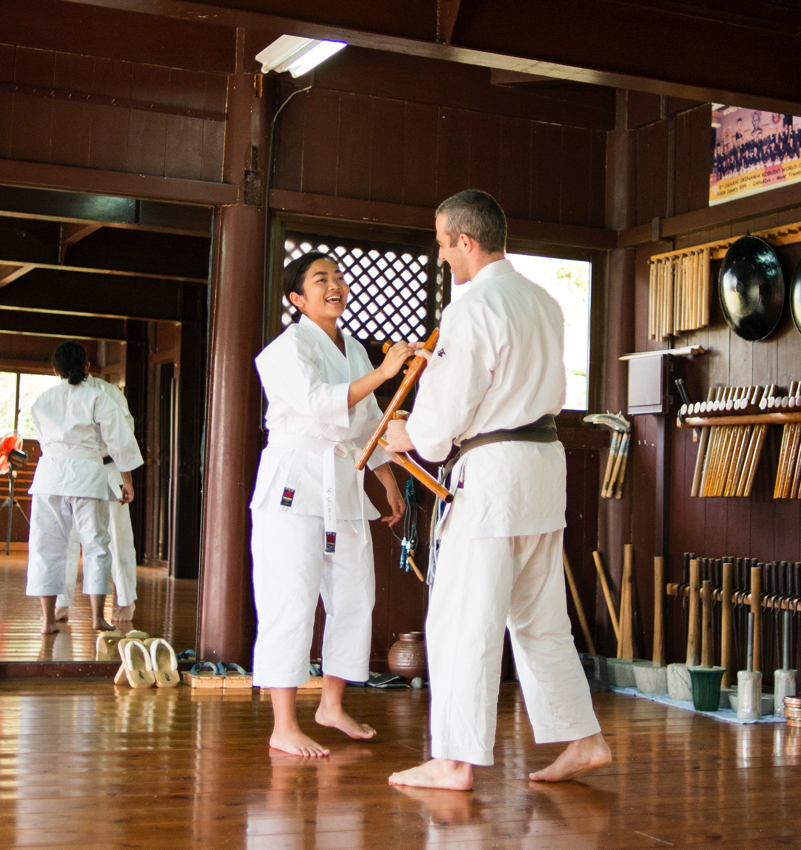 →To update you all, my arm is still strongly attached to my shoulder.

I also tried other weapons. 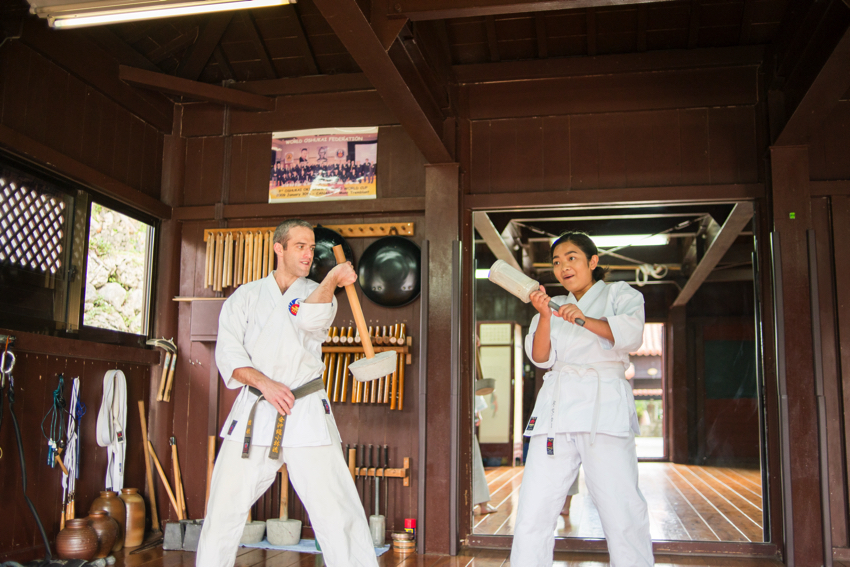 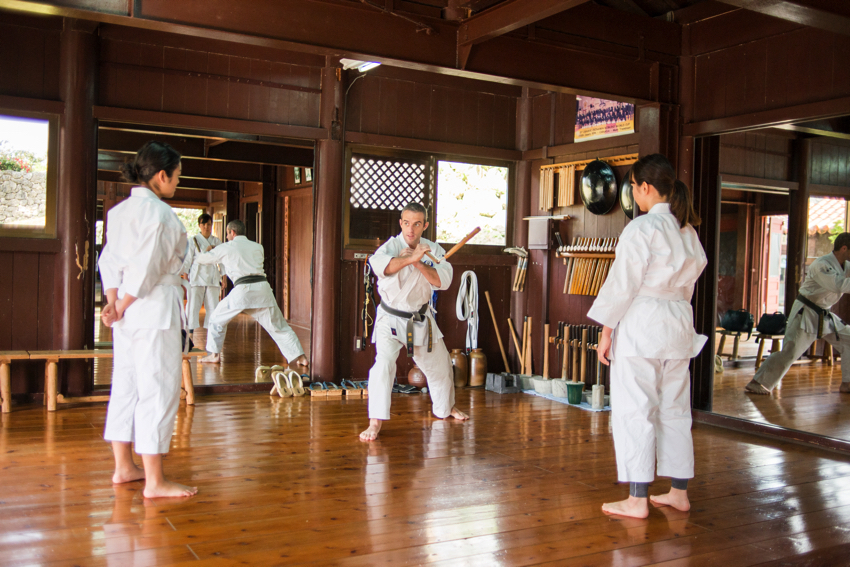 After that, Sensei Kevin taught me some simple block and attack skills of the Shorin-ryu. 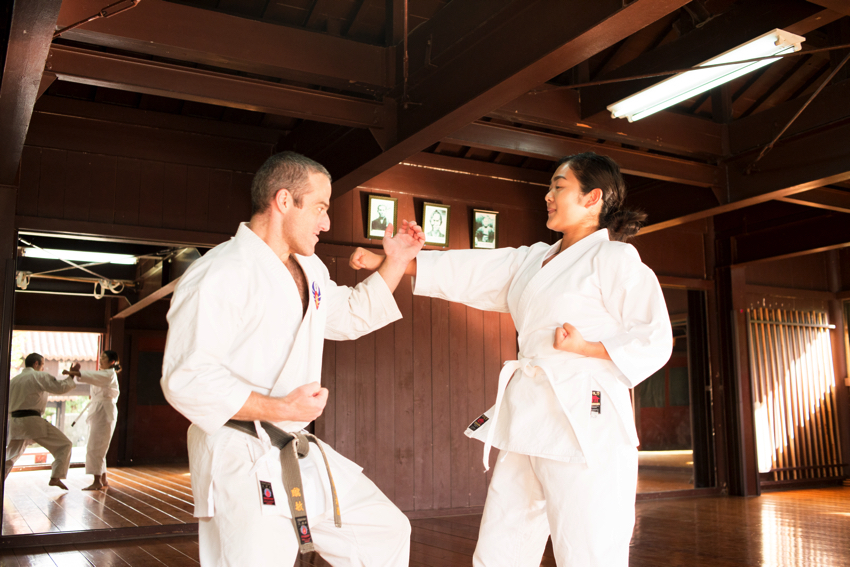 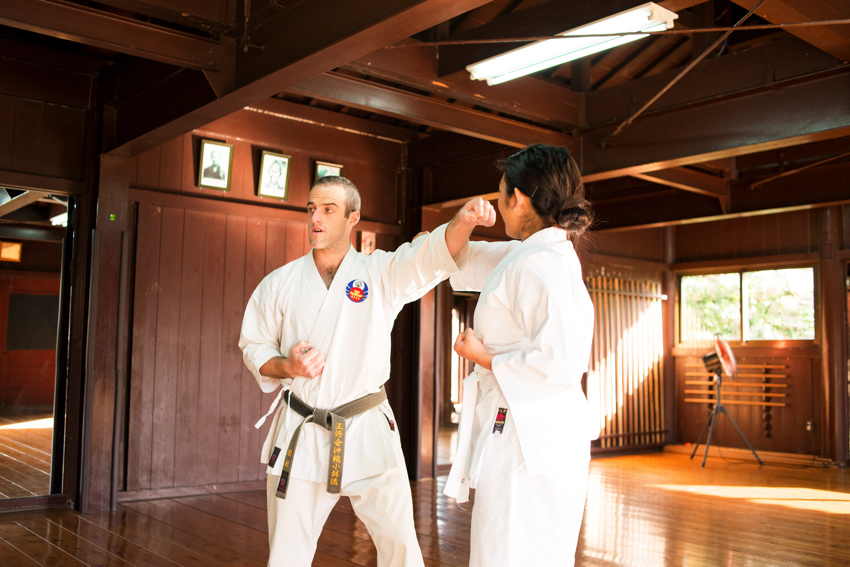 → I wondered is it hard for people with black belt to control their strength and power while practicing? Will I be hitted hardly? The training session began as these questions lingered around my mind…

We had gone up and down the whole dojo stepping and punching. Precisely working on where my arms and legs were supposed to go, making each block and strike better and stronger than the one before.

Sensei told me that learning this one move could take years and sometimes, they would practise this one move for a whole hour and that’s where you become your belt.

To have the patience to repeat and pay attention to every detail is one of the beauties of this art I am learning to appreciate.

Kevin sensei sadly says that the philosophy and the meanings of karate are being lost, quite a few people are wishing to get high scores in competitions or learn the techniques of karate movies. However, Kevin sensei was delighted with the fact that an increasing number of people are interested in getting a black belt rather than becoming the top.

My first thoughts about Karate were（（Why can’t we learn those cool techniques that we saw in movies?）), but after the lesson, I finally understood the meaning behind learning any kind of culture… it’s that connection you make between the art and your everyday life, as what I had explained earlier.

One connection was never move backwards, in most combat training especially Karate, you are taught to move forward even when you are defending.

It is very rare you see backwards movements, and to connect this with life (even if it sounds corny) there is only one way you should have in your life and that is forward. The notion to move backwards in your life is pointless, we cannot change what has been done but can edit and alter what we want the next step to be.

Karate’s technique / technology can always be applied to the principle of life.

What to gain from this Karate program

I learned the foundation of Karate in today’s lesson.

The short introductory lesson at Murasaki Mura cut off any excuses I had left in me to not start karate, especially being given this opportunity to learn in the birthplace.

→ Instructors do not stay in Murasaki Mura everyday, so please make sure to reserve beforehand.

For women who are curious about Karate!

Not only Japanese,English, but also Chinese and Korean teaching are available! Want to give it a try? Come and experience this small, short and sweet lesson that will acquire you the basis of Karate♪

For men have just started or are looking to start!

What are you waiting for?

For the professionals, I would highly suggest connecting with the dojo at Murasaki Mura.

Instructors here have trained with people all over the world, the training you will receive is tailored to your body, capabilities, desires and needs. 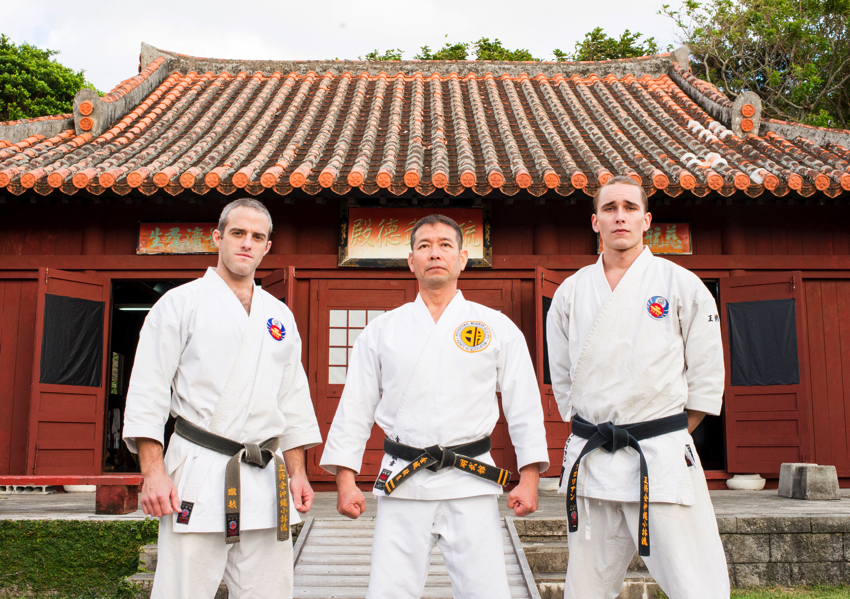 Born in Philippines, I was raised in the UK. I came to Okinawa for the reason of getting away from the busy life in London and finding myself again. I・love・travel. From laying on the beach to trekking up mountains. I love it! I don’t like mayonnaise and vinegar and I don’t know why! What I am sure about I’m just living my best life right now. 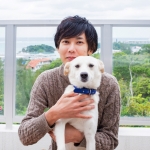 Ｗe recommend this pet-friendly hotel to those who love both Okinawa and dog! You can live in hotel with your beloved dog. 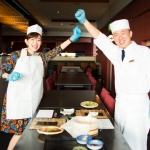